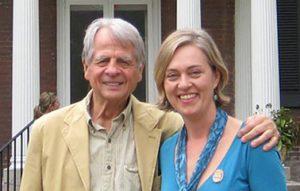 The Synergetics exercises are a series of no-impact workouts  done for 12 minutes in the morning and 12 minutes in the evening to ease the body from fat, stress, and pain. Breathing, stretching, isokinetics, and meditation-in-motion soothe and strengthen your body. The hand-held PocketGym provides stability and strength to the gentle but effective isokinetic motions.

History of Synergetics and the PocketGym:

Taylor Hay developed Synergetics at age 50 because he had run out of exercise options. With knee injuries and hernias from over-exercise, he created a no-impact system of movements inspired by Isokinetics, Dynamic Tension, Tai Chi and Yoga. The gentle, flowing motions of Synergetics protected his injuries as they strengthened and toned and flexed his body.  Soon he began sharing the unique motions with groups and wrote his first book as he consulted with physicians and exercise physiologists.

Taylor and his wife Joanna began teaching Synergetics around the country. They co-wrote, published and produced books, videos and CDs for a worldwide audience.

In 1990 their book Synergetics: Your Whole Life Fitness Plan was published by Simon and Schuster’s Pocket Books. Soon after, their first videos, Synergetics, and Fantastic Faces were released. They toured the United States from 1991- 1995 teaching and making media appearances. Individuals, health care practitioners and fitness centers have adopted the exercise system to help reduce fat, stress and pain.

The PocketGym came out in 2001 with a new video series and a patented, hand-held exerciser. Joanna and Taylor continued to tour and teach.

Today, Synergetics is practiced all over the world.  Most of our orders have come from word-of-mouth—practicioners telling their family, their friends about their wonderful results.